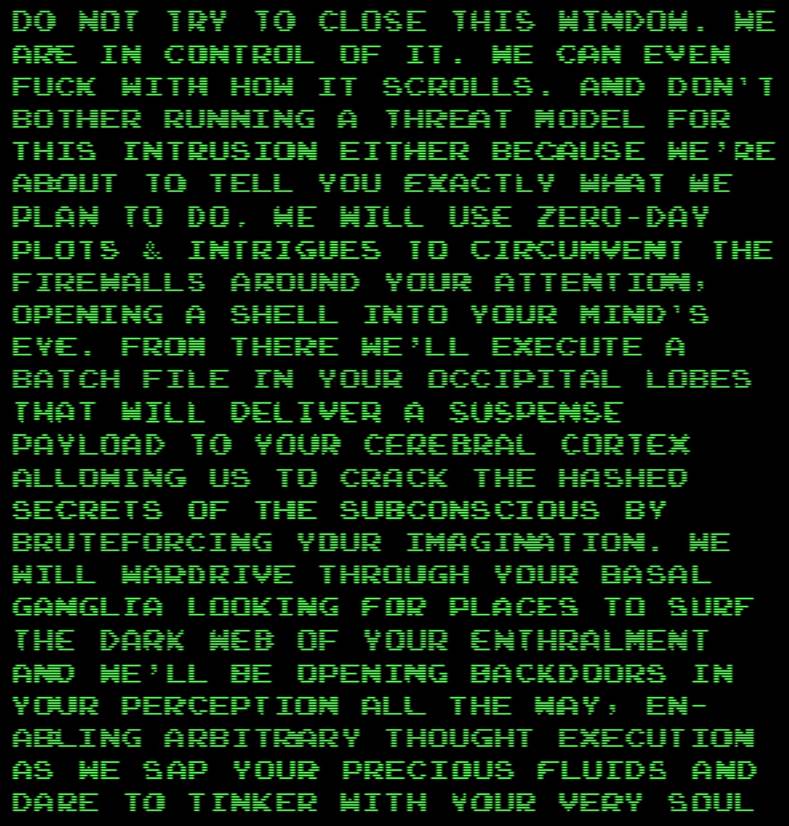 20 Halvings Into the Future

Flying (in an aircab)
The tamper alarm is shrieking like a triggered bitch. A pungent mist hangs in the air. 'Tamper alarm?' thinks Agent-94. That might have something to do with the forced-open underpanel. Shreds from the panel's cover have spilled onto the floor in front of the aircab's two passenger seats, along with assorted entrails from inside. Above the panel is a 180-degree video panorama, currently off. The hum of the cab's engines rises for brief intervals as its altitude dips due to pockets of air turbulence.

The tamper alarm continues shrieking. A neuroelectric storm rips through Agent-94's synapses, jolting open a seam of recognition chiselled so deep by years of exposure training, no desensitiser could ever block it. 'It's that mist,' thinks Agent-94.


> PLAY the teaser for INJECTION QUEST

Suddenly it's 'Whoops!' Too many seats.

And I don't wanna, y'know suggest anything, so I just look around and shit. I've been rudely awakened right? Seems prudent then to take stock of the situation. I've been sleeping in here for exactly 15 nights at this point. Not by the calendar: I just know I had to move the piece-of-shit a few hours ago because city responders classify a vehicle as 'abandoned' after it's been parked where it isn't registered for more than 14 days.

My wheeled, soft-sided carry-on appears to have been disturbed. It was already somewhat deflated without the cheap, bulky sleeping bag now unrolled around me in the driver's seat, and it's still where I left it, telescopic handle collapsed, thermos and hot water bottle peeking from its inner folds. I can still feel the other set of each inside the bag with me, next to the monkey wrench with the rubber grip. These are cold nights in Van, mid-December of '22, and my piece-of-shit's HVAC's been busted since last winter.

When I'm not wheeling it around behind me, I keep the carry-on next to me on the passenger seat. So when the driver side is reclined, as it is right now, there is one back seat unoccupied. That's the trouble with sleeping in your car. Too many seats. Oh, you can 'get lost' well enough on a random residential street with locals parked all around. But once you've been found, you're found, and there's only a cheap manual lock, or maybe a wireless RollBack hack, between you and instant bedmates. Way too many seats.

I prefer to choose my bedmates in advance, thanks.

> READ chapter one of THE STEGANOSAURS